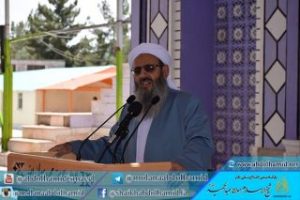 Shaikh Abdol-Hamid considered Ramadan and its last ten days as a spiritual divine table for Muslims and advised and emphasized on taking advantages of the remaining days of Ramadan.

He was talking to tens of thousands of worshippers before Friday prayers in Zahedan’s Friday gathering on May 7, 2021.

The Friday prayer leader of Sunnis in Zahedan said: “For the spiritual nourishment of human beings in Ramadan, especially in the last ten days of this month, Allah has spread a big table and invited His servants to enjoy the divine blessings”.

“Allah is merciful to His servants and he had sent prophets and divine books to guide and save them, but unfortunately we are not grateful servants to know the value of God, the Prophet, the Qur’an and the value of Ramadan”, president of Darululoom Zahedan said.

“Allah is the most merciful, if a servant takes a step towards Allah and wishes to reach the paradise and strives to be saved from the hell, he can get the reward of eighty-two years of worship in one night; this is the grace of God. Allah welcomes a person who returns to Him”, he said.

Shaikh Abdol-Hamid added: “Allah wants us to take benefit from this spiritual table of Ramadan properly. Recitation, remembrance, repentance, prayer, supplication, alms and charity are the foods of this table. Allah is pleased when servants are benefiting from this table as much as possible”.

He continued: “Striving to worship Allah causes His pleasure. Ingratitude, laziness in prayer, and not paying Zakah cause Allah’s dissatisfaction”.

Referring to the importance of paying Zakah, Imam of the Grand Makki Mosque of Zahedan said: “Allah Almighty has given us money and wealth, we must pay their Zakah. It is injustice if people deny to pay 2.5 % of their earned money as Zakah while Allah has given them the entire wealth.”
He went on to say: “Practice the Noble Qur’an, which is the Book of God. Adhere to the commands and prohibitions of the Qur’an and adhere to the rules of Islam”.

“Be fair, just and honest; do not oppress your relatives and neighbors, do not slander. Live clean, healthy and fear Allah”, said the prominent Sunni scholar Sistan-Baluchistan.

“Ramadan is going to an end and we have reached the last days of this special course of reform and purification. Do not miss the opportunity and make up for all the shortcomings in this month”, said the Iranian eminent Sunni scholar.

He emphasized on remembrance of Allah, helping the poor and cooperating with relatives and neighbors.

Shaikh Abdol-Hamid said that in the last days of Ramadan, seek the Night of Al-Qadr and make up for the shortcomings in worship. “Different classes of society, including men and women, old and young should try to reform the society and cooperate with each other”, he urged.

“Darululoom Zahedan is the lasting act of its late founder, Mawlana Abdol-Aziz and you dear people. Help this seminary and all religious schools, but donate a large part of your donations to Darululoom Zahedan”, the Iranian Sunnis leader further said.

Referring to the passing of Mawlana Abdol-Wahed Ahrari, an Iranian Sunni cleric of Gazik in the southern Khorasan, Shaikh Abdol-Hamid mentioned him as a sincere and pious personality and one of the companions of Mawlana Abdol-Aziz, founder of Darululoom Zahedan.

Shaikh Abdol-Hamid also prayed for the forgiveness of Sharif Khan Salarzehi, one of the Baloch tribal elder in Nimruz/ Afghanistan, and Nematullah Shahbakhsh, one of the security squad of the Grand Makki mosque.